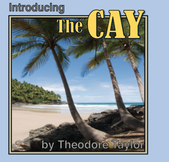 ​If you want to listen to the audio of this novel go to the following link.  Make sure you also follow along in the book as you listen to the audio version.
disk #1
drive.google.com/a/beachwoodschools.org/file/d/0B_H_ibim_
6rCZktuNnhPZ01BUlk/view?usp=sharing

For fans of Hatchet and Island of the Blue Dolphins comes Theodore Taylor’s classic bestseller and Lewis Carroll Shelf Award winner, The Cay.
"Phillip is excited when the Germans invade the small island of Curaçao. War has always been a game to him, and he’s eager to glimpse it firsthand–until the freighter he and his mother are traveling to the United States on is torpedoed."
Check out the following powerpoint with background information about this exciting novel.

Theodore Taylor talks about how he came to write The Cay:

Check out this video to hear from the author:
www.youtube.com/watch?v=lkM2mIM8Atk

Summary chart for The Cay:

The link below will take you to the summary chart for The Cay.  This chart will be used later as we complete some other activities from The Cay.

Character Chart:
As you are reading the novel you will need to create a list giving details about the character development of both Phillip & Timothy.  Follow the directions on the link below as you create your ongoing Google doc.
docs.google.com/a/beachwoodschools.org/document/d/1VmtV6pYf389
​IYXXT9E_XTWeoY61wrtPWbR12ZaW7jjM/edit?usp=sharing

Character in The Cay:

Dynamic Character - R.A.C.E. paragraph:
Use the link below and respond to the prompt on your google doc.
​You should use the character chart you made from the novel, to help you with your response.
Make sure you include all the steps as you create your R.A.C.E. paragraph.
​Submit a hard copy for credit.
docs.google.com/a/beachwoodschools.org/document/d/1U_
KBHOlADbkgWWPLmuDJJsIXPwFdjtSUYZ6qnljgo4g/edit?usp=sharing

Compare / Contrast powerpoint:
Fill out the sheet that goes along with powerpoint below.

Vocabulary for The Cay:


*********************************************
​After our reading of The Cay you will be reading another book that has been paired with Theodore Taylor's novel, as they are different and they also both share some ideas in common. Here are a few videos to give you an overview of the books we will be looking at and comparing to The Cay.  If you have earbuds check these videos out.
docs.google.com/a/beachwoodschools.org/document/d/1Bo0gNK1SoOrarWTmmfLBn_2qqqD5OED3WBaLenPNYUw/edit?usp=sharing 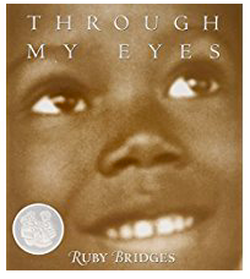 ​ Through My Eyes, by Ruby Bridges
In November 1960, all of America watched as a tiny six-year-old black girl, surrounded by federal marshals, walked through a mob of screaming segregationists and into her school. An icon of the civil rights movement, Ruby Bridges chronicles each dramatic step of this pivotal event in history through her own words. 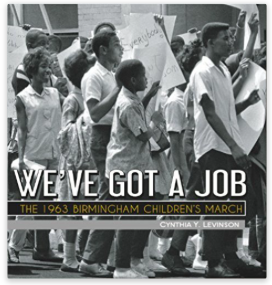 ​We’ve Got a Job, by Cynthia Levinson
We’ve Got a Job tells the little-known story of the 4,000 black elementary-, middle-, and high school students who voluntarily went to jail in Birmingham, Alalama, between May 2 and May 11, 1963. Fulfilling Mahatma Gandhi s and Dr. Martin Luther King, Jr. s precept to fill the jails, they succeeded where adults had failed in desegregating one of the most racially violent cities in America. Focusing on four of the original participants who have participated in extensive interviews, We ve Got a Job recounts the astonishing events before, during, and after the Children s March.

Notes to take as you read your alternative book:

Open up this document and go through the list of possible people to research.
On the notecard put your top 5 choices.  Mrs. G. will pick one of those for you to research.